Quantifying the unquantified costs of uncertainty propping up RE tariffs

Declining renewable energy (RE) tariffs, driven by favourable policy support and decreasing equipment costs, have facilitated the uptake of renewable power in India, with the lowest realised solar and wind tariffs dipping to around INR 2.44/kWh in 2017 (see Figure 1). However, this downward trend in tariffs has stalled. While the impact of the imposition of safeguard duties on solar module imports in 2018 in driving tariffs up is well understood and easily quantifiable, the prevalence of other equally consequential risks could also be preventing further tariff declines. Delays in payments made by discoms to RE developers, the renegotiation of power purchase agreements (PPAs), and curtailment are three such prominent risks.

Figure 1: Trajectory of RE tariffs in India 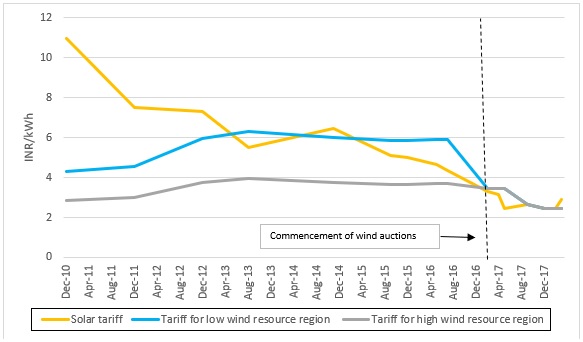 Note: Tariffs for wind before the commencement of competitive auctions were sourced from Central Electricity Regulatory Commission (CERC) orders for RE tariff determination. Tariffs in FY 2012–13 and the first half of calendar year 2014 exclude the impact of accelerated depreciation benefits, as per the prevailing regulation.

The Andhra Pradesh government’s decision to renegotiate RE PPAs drew criticism for the adverse impact it would have on investor sentiment in the sector, including from the central government.[1] Instances such as this have resulted in investors associating higher risk perceptions with the sector. This has in turn led to investors expecting higher returns, and subsequently, factoring in higher tariffs into their bids. On the other hand, extensive payment delays lead to greater working capital requirements and lower returns for equity investors. Similarly, the unexpected curtailment of RE generation adversely impacts project cash flows and equity returns, creating higher working capital requirements. Thus, when investors expect payment delays or curtailment, they factor higher working capital requirements into their tariff bids in order to protect their returns. This subsequently leads to higher tariffs.

Considering the limited data available on the extent of RE curtailment, this note focuses on quantitatively analysing the impact of payment delays, and higher risk perception due to possible renegotiations, on tariffs.

To quantify the impact of these factors, the latest solar park bid awarded by Solar Energy Corporation of India (SECI) at the time of writing – INR 2.87/kWh, realised at Dondaicha Solar Park (Maharashtra) in May 2019 ­– has been chosen as a baseline for establishing returns expectations. The solar park project was chosen for two reasons:

It is worthwhile to note that while investors’ risk perceptions vary based on whether the offtaker is a central or state entity, instances such as the Andhra Pradesh renegotiation episode have the potential to adversely impact risk perceptions for all categories of offtakers. This is especially true in the case of foreign investors. Therefore, this note demonstrates the potential adverse impact of heightened risk perceptions in general through an analysis of a PPA tariff with SECI as the offtaker. Further, while the analysis uses solar tariff to quantify the impact of these risks, a similar analysis is also applicable to wind.

Investors will undertake high-risk investments only if they believe that the returns are high enough to compensate for the risks involved. To illustrate how these returns expectations could change, we first established equity investors’ expectations in the base case. The various assumptions pertaining to the analysis are outlined in Table 3. Using a discounted cash flow methodology, we estimated the post-tax equity internal rate of return (IRR) pertaining to the Dondaicha Solar Park tariff to be 11.3 per cent, which is specified in the second column of Table 1.

In order to model the impact of payment delays on tariffs, we have factored in working capital requirements equivalent to two months’ electricity sales in the base case, in line with CERC recommendations.[3] If the payment delays extend beyond two months, the higher working capital requirements eat into the returns of equity investors (see Table 2) if the tariff remains unchanged. In order to retain equity returns at the same level as the base case, a considerable increase in tariffs will be required depending on the extent of the payment delay.

If investors factor in the prevailing average payment delays (~12 months) into their solar tariff bids, it would translate into considerably higher payments to RE developers relative to the base case for India’s discoms. Assuming 25 GW of solar projects are contracted annually over the next ten years for India to meet its 2030 solar deployment ambitions, a six-month payment delay could add INR 10,250 crore to the expenditure of India’s debt-laden discoms over the lifetime of each year’s capacity addition.[4] Further, each additional three-month delay could add INR 7,400 crore to this payment burden.

Quantifying the impact of higher risk perception due to renegotiation

If higher risk perceptions due to renegotiation are factored in by equity investors into their tariff bids at RE auctions, they would subsequently expect higher returns. While the cost of debt could also increase with heightened risk perception, we have assumed it to remain constant throughout the analysis in order to focus on the impact of changes in equity investors’ returns expectations.

Table 2 depicts the extent of the increment in tariffs for a range of return expectations. Specifically, every 100-basis point increment in expected equity IRR could add INR 0.05/kWh to the tariff. This translates into higher annual discom payments to the tune of INR 91,000 per MW of contracted solar PV capacity. India is targeting 25 GW of solar projects to be contracted annually over the next ten years as it races to meet its 2030 solar deployment ambitions.[5] Each 100-basis point increment in the expected equity IRR resulting from an enhanced risk perception due to PPA renegotiation could add INR 5,700 crore to the expenditure of India’s debt-laden discoms over the lifetime of each year’s capacity addition.[6]

While the analysis presented above indicates the extent to which enhanced risk perceptions due to renegotiation could impact tariffs under various scenarios, CEEW Centre for Energy Finance is working on a more rigorous quantification of the risks impacting RE investments.

It is apparent from the foregoing analysis that uncertainty for investors – be it longer payment delays or a higher risk perception due to possible renegotiations and market uncertainty – could be playing a significant role in propping up RE tariffs. While payment delays and PPA renegotiation are tactics that some discoms resort to for easing the immediate financial burden of payments to RE developers, this approach focusses on short-term financial benefits at the cost of ignoring their long-term financial impact. Strict contract enforcement and timely payments could translate into RE developers lowering their return expectations and working capital assumptions while making tariff bids. Over time, this could facilitate further declines in tariffs. Given that the targeted RE capacity increases dwarf the existing generating capacity, it would be in the discoms’ best interest to weigh out the future implications of their actions. Note: Cost of debt and tax rates have been taken as the rates prevailing at the time of the Dondaicha Solar Park bid.

"CEF Analysis” is a product of the CEEW Centre for Energy Finance, explaining real-time market developments based on publicly available data and engagements with market participants. By their very nature, these pieces are not peer-reviewed. CEEW-CEF and CEEW assume no legal responsibility or financial liability for the omissions, errors, and inaccuracies in the analysis.

You might also like:
Safeguarding the solar sector
Plummeting Global Solar Tariffs: Drivers and Lessons for India
Streamlining Open Access – An Alternative to Scaling Renewables in India?
Andhra Pradesh – sending investors packing, even if contracts are upheld
See recent posts