Customs duty for solar manufacturing is good, but are we prepared for the potential fallouts?

CEF Analysis
Indian government intends to levy basic customs duty on solar cells and modules from April 2022. We have done a stock take on potential challenges and recommended interventions to overcome them

India has deployed solar power projects at an exponential pace since 2010. Unfortunately, solar equipment manufacturing has not kept pace with project deployment. The government has implemented or announced various policy instruments to scale up domestic manufacturing, but these measures have not yielded the expected results.1 Currently, India has an appreciable solar PV (photovoltaic) module manufacturing capacity and minimal solar cell manufacturing capacity (Table 1). However, a few decisions that the government has taken recently can accelerate the process of atmanirbharta (self-reliance) in the sector. This note examines these decisions and suggests key steps to reduce uncertainty in the industry.

In the budget speech for FY 2021–22, the finance minister announced a 20 per cent basic customs duty (BCD) on solar inverters. On 9 March 2021, Ministry of New and Renewable Energy (MNRE) released an office memorandum that suggests the implementation of 40 and 25 per cent BCD on solar modules and solar cells, respectively, from April 2022.Our analysis suggests that implementing 40 per BCD on solar modules can increase the discovered tariff by 20 to 25 per cent (INR 0.40 to 0.50/unit based on current solar module prices) when compared to the recently discovered tariffs.2

In August 2020, a report by CEEW-CEF recommended a bouquet of interventions that are required to scale up domestic manufacturing in the short, medium and the long term. Our analysis suggested that BCD is an important measure and must be implemented in a tapered manner with a sunset clause. We recommended 20 per cent duty on solar cells and modules with a gradual increase and decrease between 2021 and 2030.3 However, an implementation of a high quantum duty can lead to consequences that may have cascading impact, if not addressed immediately. We identify key challenges and recommend steps that the government should take to address them.

The second phase of the safeguard duty (SGD) will lapse in July 2021. The Directorate General of Trade Remedies (DGTR) must issue a notification indicating whether or not SGD will be extended. Uncertainty around the duty structure will lead to higher tariffs and lower investor confidence. In case the duty is extended, SGD will also be levied from April 2022, which may increase the cost of solar modules even further.

BCD is levied under the Customs Act, 1962, and the rates of items are specified under the Customs Tariff Act, 1975. The MNRE’s proposal to hike the BCD is an advisory that can only come into effect after the law passes in the Parliament and is followed by a gazetted notification.

Timely reimbursement of BCD under the change in law

Amidst uncertainty, project developers will bid under assumptions resulting in unfair tariff discovery. For example, if one bidder considers BCD in their total project cost and another excludes it (assuming the import of solar modules before 1 April 2022), the lowest tariff discovery will not reflect market prices. To save on additional duty, solar project developers will try to maximise their solar module imports between August 2021 and March 2022. A sudden jump in demand may increase prices and impact rooftop and utility-scale projects with commissioning dates before March 2022. To avoid such a situation, the government can issue an advisory against buying modules in advance to save on duty. The government can also commit to timely reimbursements of BCD for projects covered under the change-in-law clause. In the absence of such assurances, project developers may compare the trade-off between the interest cost to procure modules in advance with the interest cost on the 40 per cent BCD until they are reimbursed.

The Solar Energy Corporation of India (SECI) and other tendering agencies must add the provision of 40 per cent BCD to their tender clauses. They need to also include an adjustment clause that accounts for changes to the BCD rate in the future. Also, the tariff may be decreased if modules are procured during the no duty/less duty window. Such provisions will prevent confusion among auction participants and reduce the hassle around L1 price matching. Many have raised concerns that the change-in-law clause will be applicable from the amendment date in Parliament. The concern around the change-in-law clause can be addressed by adding provisions.

The rooftop industry has recently experienced multiple regulatory roadblocks, and implementing BCD can cause further setbacks to the sector by increasing the Capex costs. Reimbursing solar rooftop consumers installing high-efficiency modules (either at nil or a lower duty rate), which are not manufactured in India, can be a win–win for the sector.

Conflict in the WTO

In the Union Budget of FY 2020–21, the Ministry of Finance (MoF) announced a 20 per cent BCD on solar cells and modules. Previously, the duty was never levied due to the superseding Information Technology Agreement (ITA) to which India is a signatory. Under this agreement, India is obligated to eliminate tariffs on specified products. Therefore, the government must issue a notification stating its reason for charging customs duty on solar modules despite ITA. Additionally, President Joe Biden’s administration is expected to resolve the USA’s conflicts at WTO. This may lead to the speedy implementation of WTO rules and policies, increasing the chances of the BCD being challenged in the WTO.

Currently, different tariffs are applied to solar modules, solar cells, solar inverters, solar tempered glass, and EVA back sheets (Table 2). Some of these duties above have a sunset clause but are often extended. One needs to revisit the duties on a regular basis and assess the impact on scaling up domestic manufacturing. In case the intended result is not seen, the government must intervene with complementary policies. However, any intervention must be time bound with specific provisions of collecting and analysing data to assess the success/failure of the policy. On similar lines, the government must communicate that BCD is not permanent with possible revision in three to five years. This will incentivise companies to set up or expand existing manufacturing facilities. 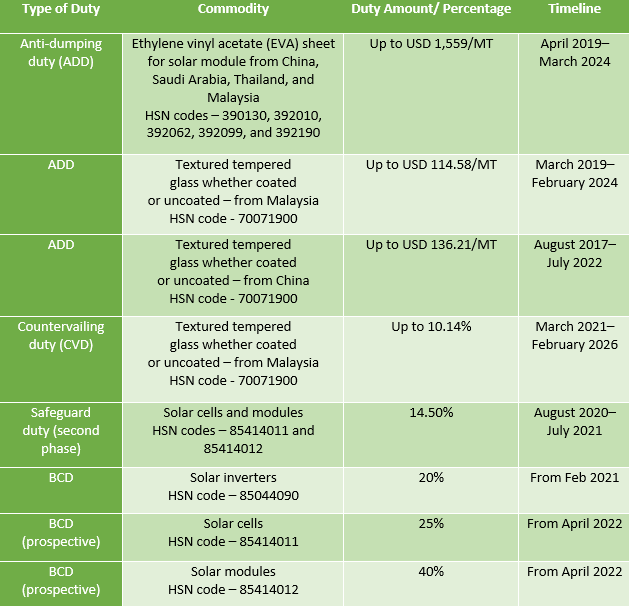 Source: CEEW-CEF Analysis from the data gathered from Central Board of Indirect Taxes and Customs (CBIC)

Any policy intervention can have unintended consequences. Preparing for and anticipating these impacts will go a long way in sustaining growth in the sector. Learnings from the imposition of the safeguard duty and GST have demonstrated the need for certainty and transparency. In the absence of clarity, the market will witness higher tariffs, greater confusion, and lower investor confidence, thus leading to lower participation in the tender process and a slower pace of project deployment.

CEF Analysis” is a product of the CEEW Centre for Energy Finance, explaining real-time market developments based on publicly available data and engagements with market participants. By their very nature, these pieces are not peer-reviewed. CEEW-CEF and CEEW assume no legal responsibility or financial liability for the omissions, errors, and inaccuracies in the analysis.
You might also like:
Guaranteeing India’s renewable energy ambitions
RE’s rush for cheap capital – right idea, wrong approach?
Quantifying the unquantified costs of uncertainty propping up RE tariffs
Making India Inc. Net-Zero
See recent posts