How can the sun shine on electricity distribution utilities?

India has set an ambitious target of achieving 450 GW of installed capacity of renewable energy by 2030—this is more than five times the current installed capacity of 82 GW.[1] One of the main stakeholders in this energy transition are electricity distribution utilities (discoms). Discoms act as an interface between electricity generators and end consumers by purchasing energy from generators and supplying it to agricultural, industrial, commercial, and residential users. Since discoms play such a vital role in this network, their financial health is critical for the ecosystem as a whole. Any stress on their finances is transmitted across the value chain in the form of delays or defaults in payments to generators, which may also result in bad loans (NPAs) for banks. Due to this interdependence, continued losses on the part of discoms could jeopardise India’s renewable energy mission. Hence, rapid action at the structural level is required to restore discoms’ financial health. In addition, a systemic shift can help establish a robust power sector.

In FY 2018–19, cumulative losses for discoms stood at over INR 280 billion (USD 4 billion).[2] This trend has become entrenched despite several government interventions, the most recent being the Ujjwal Discom Assurance Yojana (UDAY) scheme, aimed at alleviating losses by imposing guidelines to improve discoms’ performance.[3] To better understand the impact of this intervention on the financial health of discoms, we analysed two utilities—the Maharashtra State Electricity Distribution Company Ltd (MSEDCL), which recently turned profitable, and the Telangana State North Power Distribution Company Ltd (TSNPDCL), which continues to run at a loss every year. Our analysis spanned both cost and revenue streams in the pre- and post- UDAY phase.

Like any trading company, in order to make profits, a discom must increase its revenue and decrease its expenses. In the case of discoms, revenue majorly comprises of electricity bill while expenses comprise electricity procurement costs and overheads.[4] However, since discoms in India operate in a regulated market, their capacity to increase revenue is limited as tariffs are fixed according to the state’s policy and consumer demographics. Since all utilities face this limitation, one way to improve performance is to minimise costs, including those associated with electricity procurement, overheads, and energy losses.[5]

We studied the revenue generated by, and the costs associated with, every unit of electricity supplied during the period FY15 (pre-UDAY) to FY18 (post-UDAY). The analysis revealed differentiation on two counts—the spread and the operational and financial efficiency of discoms.

Table 1: Revenue and costs per unit of electricity supplied in MSEDCL and TSNPDCL 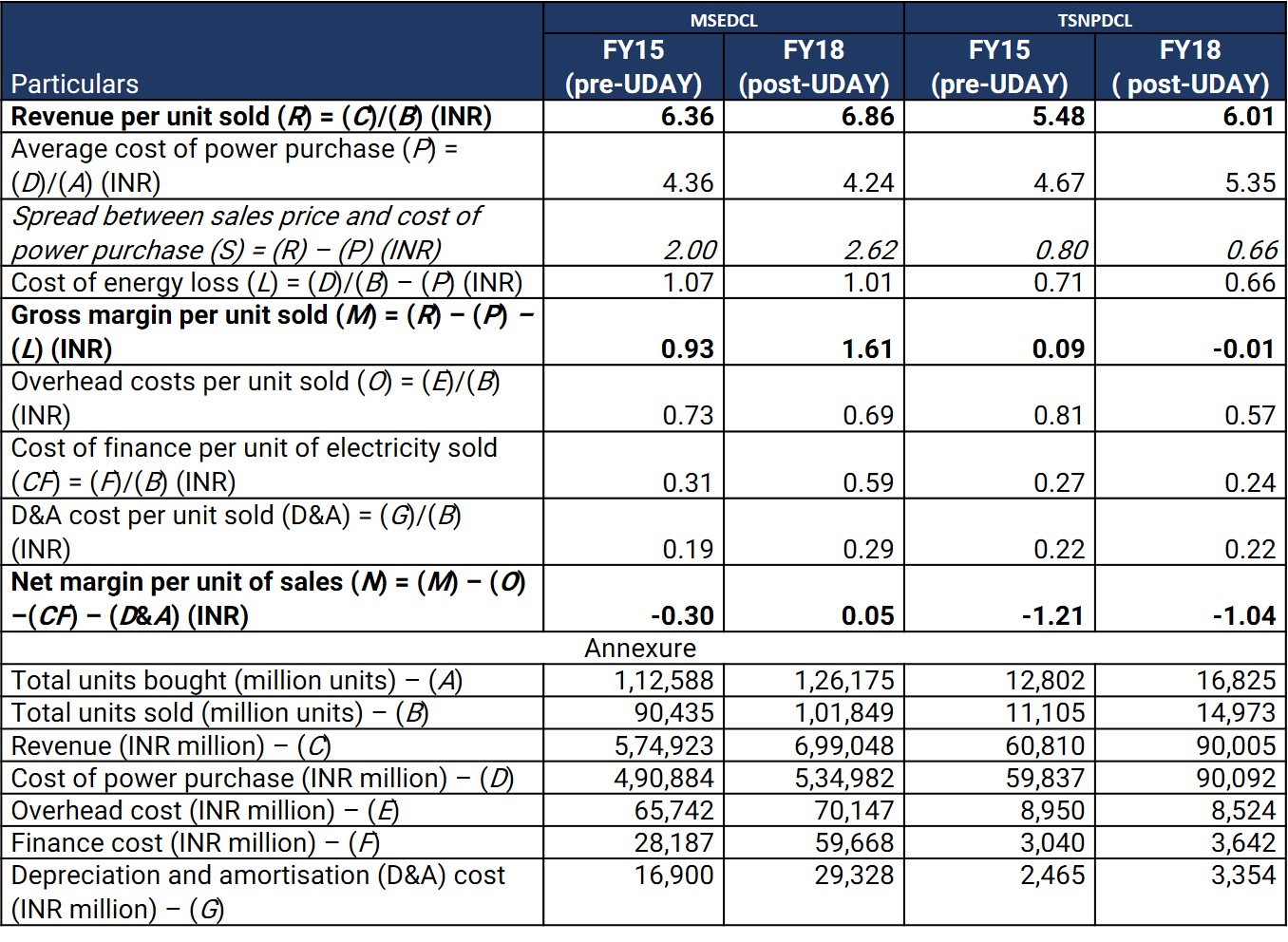 Spread is the difference between the average revenue per unit sales and the average power procurement cost.

Thus, MSEDCL has both rationalised its overall tariff and managed its procurement cost over this period. However, TSNPDCL’s inability to balance its increased power purchase costs and tariffs has resulted in a comparatively smaller spread available to cover expenses related to supply and operations.

Operational and financial efficiency – this can be described in terms of the overheads of running the business, cost of finance, depreciation and amortisation charges, and the cost of energy loss; that is, all costs other than the power purchase cost.

This shows that TSNPDCL took only 70 per cent of MSEDCL’s operating and financing costs to supply one unit of electricity in FY18. Meanwhile, by FY18, MSEDCL had lost all its advantages in financial cost rationalisation—possibly because the state government took over part of the debt under UDAY—and the cost has increased beyond the pre-UDAY (FY15) level.[6]

We suggest that for a utility to make profits, the tariff needs to be rationalised in line with the cost of power procurement. Since electricity is a state subject, the efficiencies in the cost of delivery as shown by the operational and financial prudence need monitoring and management.[7][8] Further, an operationally and financially efficient discom, like TSNPDCL, continues to reel under losses while an arguably less efficient utility, MSDECL, has been able to turn around and generate profits. This raises an important question regarding the design of future schemes. Can a one-size-fits-all scheme like UDAY address the varied challenges plaguing discoms? What worked for one state will not necessarily work for others. Future schemes need to address differences in operations, geographies, and consumer profiles. Additionally, as our research indicates, the current tariff design may not be efficient enough to address the operational and financial inadequacies of discoms.

Do you think the UDAY scheme has been successful in addressing the poor financial health of discoms in a systemic manner? What should be the way forward? Share your views and comments on the above CEF analysis at [email protected]

CEF Analysis” is a product of the CEEW Centre for Energy Finance, explaining real-time market developments based on publicly available data and engagements with market participants. By their very nature, these pieces are not peer-reviewed. CEEW-CEF and CEEW assume no legal responsibility or financial liability for the omissions, errors, and inaccuracies in the analysis.
You might also like:
How to structure thermal decommissioning in India
Renewable energy as catalyst for capital markets atmanirbharta
Streamlining Open Access – An Alternative to Scaling Renewables in India?
Corporate Renewable Energy Procurement Continues to Face Challenges
See recent posts