A power generating company (genco) in India typically sells electricity to an electricity distribution company (discom) and raises monthly energy bills for the quantum of electricity sold. Their relationship is governed by a power purchase agreement (PPA) signed by both parties. Discoms, which are typically state-owned, are responsible for electricity distribution and are obligated to meet the electricity demand in their area of jurisdiction. Currently, many discoms are loss-making and are plagued by technical and commercial inefficiencies. The problem is exacerbated by end consumers delaying and defaulting on payments, which leads to discoms delaying subsequent payments to power producers. Significant payment delays have been observed, particularly to renewable energy (RE) developers (~11 months), which have reduced their returns on investments and debt servicing. As a result, investors have become wary of making long-term investments in such projects.

At CEEW Centre for Energy Finance (CEEW-CEF), we have analysed trends in payment delays from discoms to generating companies based on data from the Ministry of Power’s PRAAPTI portal.[1] According to information in the portal, the aggregate amount overdue to power producers as of September 2019 is INR 72,524 crore (USD 10.3 billion), with an average delay in payments of close to four months.[2] Next, we segregated the payment delays across conventional power (coal, nuclear, hydro, gas etc.) and RE (see Figure 1). We observed that conventional IPPs have been facing delays of up to seven months and RE developers are the worst affected, with delays of up to 11 months. In addition, despite the high absolute amounts of energy billed, payment delays are lowest (~3 months) for conventional central generating companies (NTPC, NHPC, NEEPCO, SJVNL, NLC, etc.). These substantial delays do not paint a rosy picture for the RE sector and could prevent it from reaching the Government of India’s ambitious targets.

From the state-level analysis, we observed that states with the highest amount overdue (in decreasing order) are Tamil Nadu, Uttar Pradesh, Andhra Pradesh, Telangana, Rajasthan, Madhya Pradesh, Karnataka, Gujarat and Maharashtra. Coincidentally, most of these states have the highest RE capacities in the country (see Figure 2). A comparison of payment delays disaggregated by generating sources confirms that the national trend is repeated at the state level in most states. For example, Tamil Nadu and Andhra Pradesh have been delaying payments to RE developers by 18 and 17 months, respectively, whereas their payment delays to conventional IPPs are only six and eight months, respectively. Karnataka is the lone outlier, whose delays to conventional IPPs far exceed delays to RE developers. Our second-level analysis, which correlates electricity tariffs[3] with payment delays, was inconclusive. This is likely because these tariffs are aggregate state-level figures that conceal the larger project-level tariff differences. 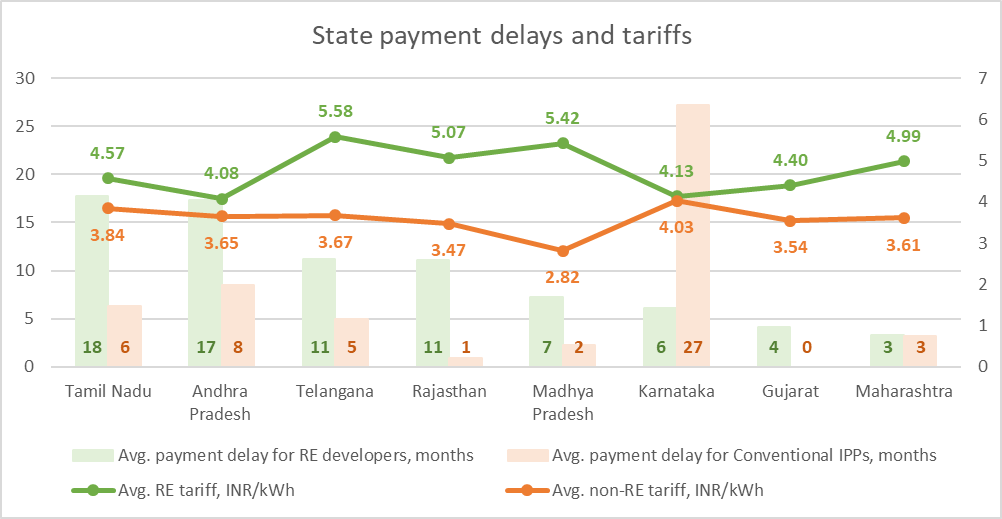 From our interaction with RE developers, we found that delays in payments are almost always attributable to projects directly contracted with discoms. However, in the case of SECI (Solar Energy Corporation of India) and NTPC PPAs, a robust payment security mechanism (including a payment security fund and tripartite agreement) ensures timely payments. A similar kind of payment security mechanism (PSM) exists for conventional central gencos as well, clearly reflecting in their manageable payment delays of around three months (see Figure 1).

Letters of credit (LC) are effective means of mitigating the impact of payment delays.[4] In fact, most PPAs clearly mandate that discoms maintain revolving LCs equivalent to the monthly average of energy billed. In reality, however, LCs are rarely created in the first instance. This led the Ministry of Power to issue an order in July 2019 requiring discoms to compulsorily maintain LCs; failure to comply would result in a denial of access to short-term markets. The Andhra Pradesh High Court has issued a stay order against this, thus compounding the woes of RE developers.

The root cause of payment delays is a combination of poor financial performance of discoms, legacy operational inefficiencies, and weak (often unenforced) payment security mechanisms. While improving discom health is a permanent solution to this problem, measures such as PSM and LC serve as short-term remedies. In addition, there are other interventions, like discounting delayed energy bills by designated public financial institutions and increasing the weightage of payable days in annual integrated discom ratings. However, as mentioned above, these are temporary fixes at best. A permanent solution to this problem ultimately lies in improving discom business operations.

At CEEW Centre for Energy Finance, we have developed a state rating tool, that utilises payment delays by discoms as a proxy for credit risk for a typical solar/wind project. The tool also quantifies other risks (such as curtailment, land acquisition, O&M, etc.) and thus assists investors/developers in answering the fundamental question, “in which state should I locate my solar or wind power plant?”.

"CEF Analysis” is a product of the CEEW Centre for Energy Finance, explaining real-time market developments based on publicly available data and engagements with market participants. By their very nature, these pieces are not peer-reviewed. CEEW-CEF and CEEW assume no legal responsibility or financial liability for the omissions, errors, and inaccuracies in the analysis.