The decline in solar tariffs in India has stagnated; its record low, still standing at INR 2.44/kWh (~USD 3.5 c/kWh), was first realised mid-2017. A recent CEF analysis indicated that uncertainty for developers, stemming from payment delays and the risk of contract renegotiation, is a significant barrier for the realisation of lower tariffs. In addition, the imposition of additional taxes and duties – like GST and safeguard duties – on solar module imports has further held up tariff declines. Globally, though, solar tariffs have witnessed a considerable decline, ranging from USD c 2.15/kWh – realised in Chile in November 2017 – to USD c 1.57/kWh, which was realised in Qatar in January 2020. This analysis delves into the reasons for the global decline in solar tariffs in order to identify any lessons that these developments may offer India.

The tariffs quoted by developers in competitive solar PV auctions are a composite of several underlying determinants, spanning both solar resource availability and the cost variables associated with a particular project. These costs broadly include raw materials costs (solar PV modules and balance of system components), supporting infrastructure costs (like solar park charges), finance costs (both debt and equity), and operations and maintenance. While all of the record-low solar tariffs have emerged in regions with high solar insolation (Table 1), certain characteristics common to all of these bids (discussed below) have favourably impacted cost variables, thereby enabling the realisation of low tariffs. 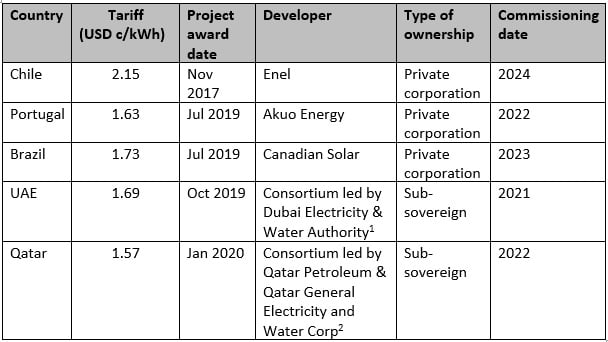 1. The developers involved in recent record-low bids are either large multinational private corporations or sub-sovereign entities. Both of these classes of developers have access to low-cost sources of finance, which is the most important factor in the discovery of low tariffs. This is evident from the following comparison between the USD c 1.69/kWh (INR 1.19/kWh) Rashid al Maktoum Phase-V bid in the UAE and the INR 2.44/kWh Bhadla Phase-III bid – the lowest realised solar tariff in India.

Figures 1 and 2 illustrate the extent to which cheaper financing costs translate into lower tariffs. 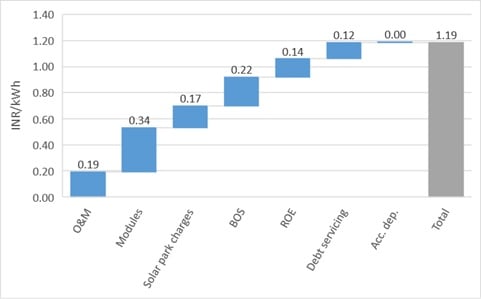 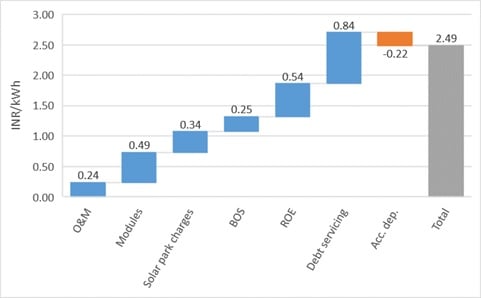 Note: The breakdown of the Bhadla Phase-III tariff contains a modelling discrepancy of INR 0.05/kWh.

If one factors in the same financing cost assumptions for Bhadla Phase-III as for Rashid al Maktoum Phase-V, the tariff declines by 36 per cent to INR 1.60/kWh, illustrating the extent to which financing costs impact the tariff.

2. The global record-low tariff bids have extended commissioning timelines - between two and six years. This enables developers to factor in assumptions of lower future solar PV module prices into their auction bids, translating into lower tariffs.

Besides the general characteristics applicable to all record-low bids discussed above, specific contractual provisions have enabled the realisation of low tariffs in certain markets.

Provisions regarding offtake: Brazil and Portugal

1.      Contractual provisions regarding the offtake of generation, which have boosted the viability of low tariffs contracted into long-term PPAs, have enabled record-low tariffs in certain markets.

2.      In Brazil, only a portion of the electricity generated is locked into long-term PPAs in the regulated electricity market. The bidders in recent auctions are expected to sell only 30 per cent and 50 per cent respectively of their power into regulated markets. [1] The remainder of the electricity generated is sold through other mechanisms, which enable developers to realise higher tariffs for that portion of the capacity. These mechanisms are equivalent to the open access provisions in India.

3.      While specific provisions pertaining to offtake in the case of the record-low bid in Portugal were not available, reports indicate flexibility for solar PV generators in sales to electricity markets for a portion of the generation – similar to the Brazilian example described above. [4] Such a provision could also have facilitated the discovery of low tariffs.

1.      Other provisions that impact project costs include the provision of land at concessional rates. Developers in the UAE have benefitted from this; it is an added advantage in facilitating the realisation of lower tariffs.[5]

India’s massive renewable energy (RE) ambitions (450 GW by 2030) are dominated by planned solar deployment. Given the rapid pace of deployment needed to achieve the 2030 target, extended commissioning timelines are not suitable for solar deployment in the Indian context. However, measures geared towards lowering financing costs and enabling flexible contractual provisions for offtake may be worth considering.

Extended payment delays translate into higher working capital requirements, whereas higher risk perceptions regarding renegotiation translate into higher return expectations. Both of these factors raise financing costs for developers in the Indian context.[6] Timely payments and strict contract enforcement could lead RE developers to lower their working capital assumptions and return expectations while making tariff bids. Uncertainty regarding the quantum and timelines of new taxes and duties adds to the confusion, forcing developers to factor more buffers into their bids. Reducing uncertainty over time will facilitate further declines in tariffs.

Instituting flexible options for the offtake of RE generation could offer a means for the lowering of solar tariffs. Contractual provisions that enable generators to commit only a portion of their installed capacity through long-term PPAs with discoms while allowing them to sell electricity generated from the remainder through the open access route could translate into lower tariffs for the capacity contracted through long-term PPAs. Open access contracts with higher tariffs will enable developers to quote lower tariffs in bids but still realise higher average tariffs. However, the implementation of such contractual structures would require changes in existing regulations to permit the separation of carriage and content in the distribution network.

Based on the foregoing analysis, lower costs of finance and longer commissioning timelines have driven global solar PV tariffs lower than those realised in India. Flexible contractual provisions regarding offtake have also facilitated the realisation of lower tariffs in specific markets. These lessons can be applied in the Indian context to accelerate the decline in tariffs. Lowering the cost of finance in the Indian context is contingent on lowering uncertainties – particularly those pertaining to payment delays, contract renegotiation, and taxation – associated with the solar PV sector. Further, flexible offtake provisions that permit a mix of long-term contracted capacity under PPAs with discoms and open access sales, supported by enabling regulatory changes, could also facilitate a decline in tariffs for the contracted capacity.

"CEF Analysis” is a product of the CEEW Centre for Energy Finance, which explains real-time market developments based on publicly available data and engagements with market participants. By their very nature, these pieces are not peer-reviewed. CEEW-CEF and CEEW assume no legal responsibility or financial liability for the omissions, errors, and inaccuracies in the analysis.

You might also like:
Customs duty for solar manufacturing is good, but are we prepared for the potential fallouts?
Deja vu 2018 – New Duties and Increased Uncertainty
Financing Energy Storage
Solar PV Manufacturing: Reassessing Priorities in the Post-COVID-19 Era
See recent posts