What ails discoms? A case study of Andhra Pradesh and Gujarat

Given the way India’s power markets are currently structured, the long-term fortunes of the sector will depend on the performance of electricity distribution utilities (discoms). However, discoms in India have been functioning sub-optimally, and have even been described as a “leaking bucket”, due to their inability to break-even despite multiple financial bailouts over the years.[1][2] The poor financial health of discoms poses risks and barriers for the entire electricity sector. As India accelerates towards its goal of 160 GW of grid-connected solar and wind energy by 2022, it is important to assess the impact of this shift on the weakest link in the system, i.e., discoms.

Recently, the government of Andhra Pradesh claimed that high renewable energy (RE) tariffs were the reason for the financial distress of local discoms, and ordered a renegotiation of power purchase agreements (PPAs). Our recent CEF analysis quantified the revenue erosion this renegotiation of contracts will cause the impacted solar and wind developers, while also hampering investor confidence in India’s clean energy market. This move by the state government raises pertinent questions regarding the future of discoms in the energy transition in light of the growing share of RE. Do renewables adversely impact the financial health of discoms? Will increasing the share of RE in India’s electricity mix trap them in a vicious cycle of continued losses?[3]

To better understand the impact of renewables on the financial health of discoms, we analysed two utilities – the Uttar Gujarat Vij Company Limited (UGVCL), a profitable utility, and the Southern Power Distribution Company of AP Limited (APSPDCL), which continues to make losses every year. The aforementioned utilities were compared because their operations are similar in terms of the renewable energy contribution as share of total electricity supply and also their customer profiles. Gujarat and Andhra Pradesh have an installed solar and wind capacity of 9,891 MW and 7,409 MW, respectively. The share of agricultural consumers in these utilities stood at 31.26 per cent and 24.16 per cent, respectively, for FY18. Highlighting these similarities is important since the blame for discoms’ overall losses has often been pinned on factors like scaling up RE capacity to meet RPO targets, revenue lost during last-mile connectivity, agricultural burden, etc. Given that the two utilities are similar on these key parameters, we try to understand how the former is able to make profits every year while the latter reels under losses.

To answer these questions, we analysed the two discoms in terms of the revenue they make against the various costs they bear to supply a unit of electricity to the end consumer in FY 2016 and FY 2018.[4] The analysis revealed that the utilities can be differentiated based on their tariff spread over the cost of power purchase and their operating and financing efficiency per unit of electricity supplied to end consumers.

Table 1: Revenue and costs per unit of electricity supply for UGVCL and APSPDCL 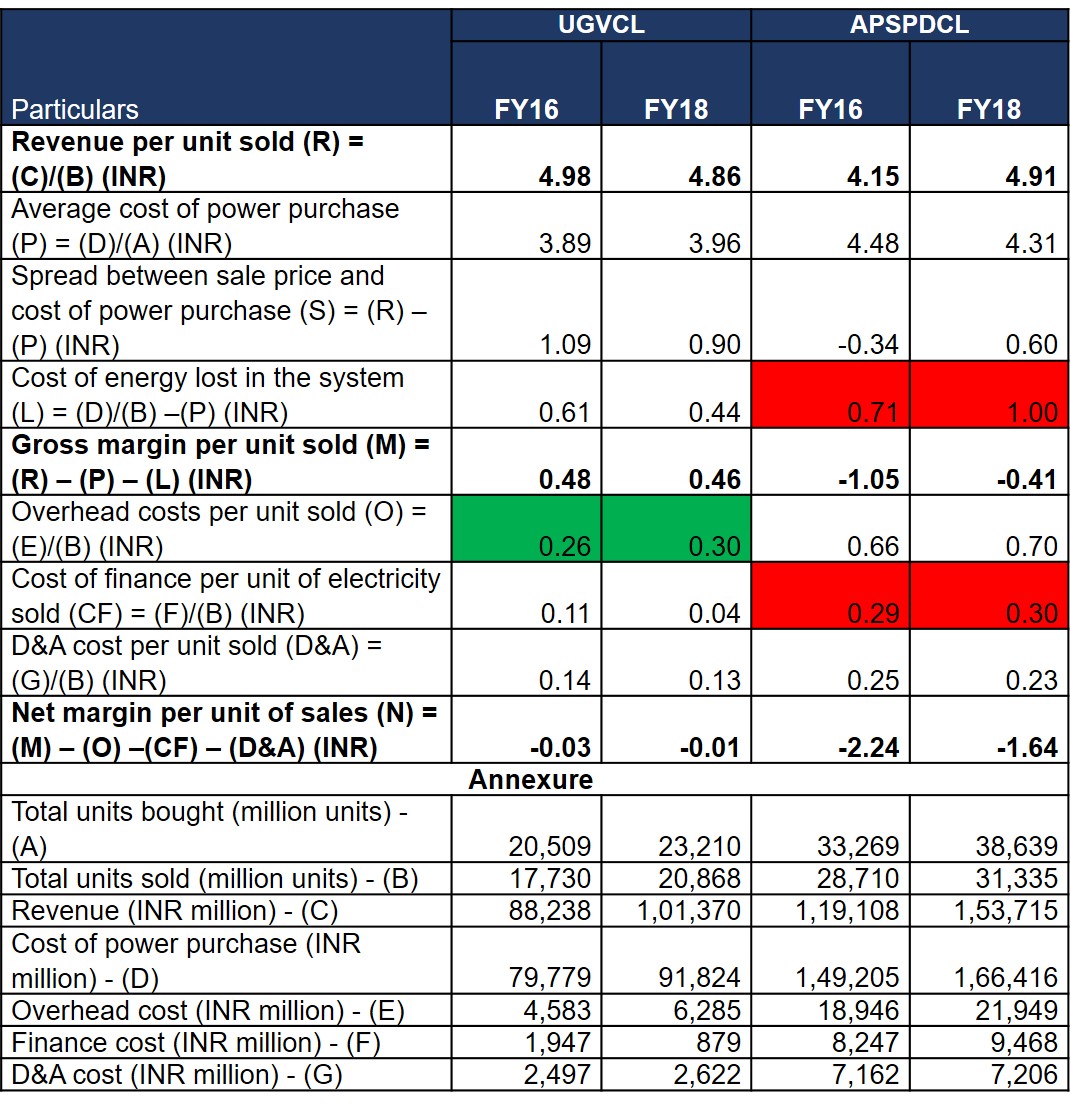 Spread: This is the difference between the average revenue per unit sales and the average power procurement cost.

Operational and financial efficiency: This can be described as the overhead costs associated with running the business, cost of finance, depreciation, and amortisation charges, and the cost of energy loss, i.e., all costs other than the cost of power purchase towards the supply of electricity.

This analysis shows that APSPDCL took almost three times the operating- and financing-related costs of UGVCL to supply a unit of electricity in FY18, thereby losing all the advantages it had in rationalising its spread. The finance costs for APSPDCL is almost eight times that of UGVCL. The high cost of finance for APSPDCL is primarily due to the discom’s large short-term borrowings in proportion to its total operations quantum. A recent notification by the government of Andhra Pradesh to strengthen Andhra Pradesh Power Finance Corporation in order to reduce the cost of borrowings for power sector companies can be considered a right step in this direction, but the step is likely to remain deficient in the face of the annual losses faced by the utility.[5]

While it is true that renewables were costlier than conventional energy in the above cases (owing to them being first-mover states), it is clear that this is not the primary contributing factor for the financial distress of the discoms (given that the cost of the power procured is allowed to be passed on in the tariff structure). As shown above, APSPDCL will continue to reel under losses due to high operational costs even if the cost of renewables were to decrease to INR 2.44 per unit (as per order), owing to its operational and financial inefficacies, as had been quantified in our earlier analysis. The opportunity cost of renegotiating contracts is likely to be higher than savings achieved by concerned discom, as it not only may lead to sector wide economic distress and revenue erosion for wind and solar developers, but it also may jeopardise risk perceptions among investors, resulting in higher tariffs, as had been shown in our analysis. Further, as shown above, it may not be an efficient solution to lift the discom out of financial distress.

Do you think renegotiation of PPAs is an efficient solution to improve the financial condition of discoms? What ails the discoms? How can we fix operational and financial inefficacies of discoms? Share your views and comments on the above CEF analysis at [email protected]

"CEF Analysis” is a product of the CEEW Centre for Energy Finance, which explains real-time market developments based on publicly available data and engagements with market participants. By their very nature, these pieces are not peer-reviewed. CEEW-CEF and CEEW assume no legal responsibility or financial liability for the omissions, errors, and inaccuracies in the analysis.

You might also like:
Financing the Energy Transition in a Post Covid-19 India
Access to cheap finance key to attainment of record-low tariffs
Solar PV Manufacturing: Reassessing Priorities in the Post-COVID-19 Era
Debarring discoms from power exchanges: will it work?
See recent posts