Counterparty risk associated with delay/default in regular payments by distribution companies is one of the most critical risks for power producers. Nearly 88% of the power offtake from power producers in India happens through long-term tie-ups[1] with distribution companies. Traditionally, discoms in India, are owned by state and have been suffering due to leakages in transmission and distribution system, poor collection efficiencies, tariff controls etc.

Figure 1 briefly explains how a payment security mechanism works with the help of an example of SECI’s payment security fund for VGF scheme under JNNSM[3]. The arrows marked with numbers represent the sequence of events for the use of PSM to cure default by a discom. 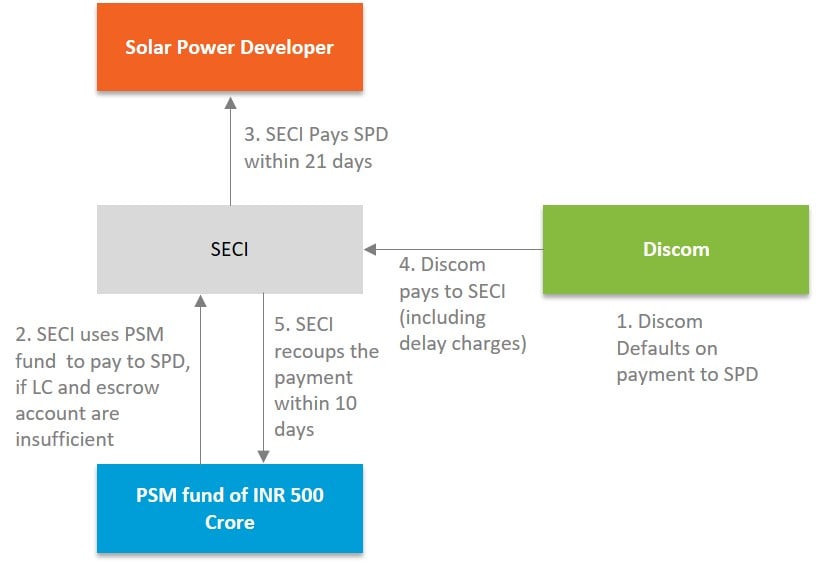 Note: PSM can only be accessed if Letter of Credit (LC) and Default Escrow Agreement are insufficient to cover for the default.

In case, the default by a Discom persists (that is, it does not pay to SECI) for more than six months from due date, SECI may invoke the tripartite agreement. In this case of default by Discom and persistence of non-replenishment of LC and escrow account, SECI also has a right to divert the generated solar power to sell to a third party.

CEF Analysis” is a product of the CEEW Centre for Energy Finance, explaining real-time market developments based on publicly available data and engagements with market participants. By their very nature, these pieces are not peer-reviewed. CEEW-CEF and CEEW assume no legal responsibility or financial liability for the omissions, errors, and inaccuracies in the analysis.
You might also like:
Wholesale power market in India
What is ALMM?
What is banking?
Offtake risk in renewable energy sector in India
See recent posts