The government of India has set a target of installing 40 GW of grid-connected rooftop solar (RTS) power by 2022. To accelerate deployment, states and union territories have enacted net metering policies for RTS. However, with an installed capacity of only 2,141 MW thus far, the grid-connected RTS sector is struggling to scale as expected, leading us to question the efficacy of the RTS policy framework.[1] Net metering policies have failed to sufficiently stimulate this sector. Inefficiencies in some of these policies have resulted in poor uptake of RTS. This analysis identifies the technical and commercial inefficiencies and recommends a way forward. Technical inefficiencies make net metering less economically viable for non-residential consumers, while commercial inefficiencies pose a deterrent for Indian consumers seeking value for money. This has resulted in the limited adoption of RTS by both residential and non-residential consumers.

Commercial and industrial (C&I) consumers contribute nearly 51 per cent of the total electricity demand in India.[2] Therefore, in the diverse energy systems landscape, for a regulation like net metering to be successful, it is important that installing an RTS system makes business sense for C&I consumers. However, policy restrictions on system size and grid integration often discourage C&I consumers from transitioning to RTS. For instance, most regulations limit RTS system size to under 1 MW at the very most (and 1 kW at the very least), and also cap the system capacity with respect to the total sanctioned load (often between 80 to 100 per cent). Such restrictions on system size reduce the economic viability of RTS, as a 1 MW RTS system can only produce 1.3 to 1.4 million units of electricity per year, while the energy requirements of some C&I consumers could be much higher. In response, regulators base their argument on two points, first that these restrictions are put in place to ensure that the discoms do not forego their revenue from C&I consumers as it is used to cross-subsidise electricity for agricultural and residential consumers and second, that consumers with greater requirements should procure power through the open access mechanism (i.e. a mechanism which allows customers to buy cheap power from open market) to meet their excess demand. However, the recent precedent set by the Maharashtra Electricity Regulatory Commission (MERC) in the case between Cleanmax Enviro Energy Solutions Pvt Ltd v. Maharashtra State Electricity Distribution Company Limited suggests that net metering and open access are two separate arrangements and cannot be availed simultaneously by the same consumer due to challenges related to grid security, accounting, billing, settlement, etc.[3] This has left several consumer segments dissatisfied with the current RTS regulations, and a large share of roof space remains underutilised which could have otherwise supported rooftop installations in the industrial consumer segment.

Transitioning to RTS is a giant leap for many Indian consumers, especially because of its high upfront costs and consumers’ conservative approach while making investment decisions.[1] A residential household will shift to RTS only if they get higher than market returns on their investment. However, in certain states, RTS policies are unable to provide consumers adequate financial incentives. For instance, in 11 states, no incentive is provided to consumers who produce more power than they consume or be prosumers. In cases where the export of excess electricity is allowed, states may compensate consumers at the state average power purchase cost, which varies from INR 2.29/kwh to INR 4.12/kwh for most states, and is often lower than the tariff at which consumers (especially non-residential) buy power from the grid. Such provisions increase the payback period for RTS investments, making it less attractive for consumers. In response to this, regulators often argue that these restrictions ensure the financial health of discoms, but studies at CEEW suggest that innovative business models can make RTS profitable for both discoms and consumers.

Lastly, we also found that for a few states, certain parameters are not specified in the regulation which creates ambiguity in the operating procedures and leaves considerable scope for individual discretion at the executive level of SERCs and discoms. This regulatory inefficiency makes it difficult for consumers to make an informed choice. This exacerbates the problem of low rooftop solar adoption due to lack of familiarity with the product, and the regulatory barriers, which together are prohibitive in many cases. In addition, procedural issues such as delays in approving applications, site inspection requirements, scarce availability of net meters, delays in subsidy payments, and low transparency discourage consumers from transitioning to RTS.

Model regulations for net metering were introduced in 2013 to promote power generation from renewable energy sources, particularly RTS. However, even after six years, certain technical, commercial, and regulatory gaps exist. From the technical standpoint, the central and state governments should redesign the regulations and focus on lifting the excessive restrictions on system size, sanctioned load, and on grid integration as they are leading to technical inefficiencies. It is time that we learn from past experiences and correct our future course. Certain recommendations to this effect are:

RTS has huge potential in India as it offers significant cost savings. However, some aspects of existing regulations limit the commercial attractiveness of RTS for consumers. Countries look up to India when designing regulations for utility-scale solar power plants, and it is now time for India to take the lead in the global transition towards distributed solar generation as well, by learning from its past and designing effective policies which can be scaled up.

More on rooftop solar by CEEW-CEF

Do you think net metering regulations have been successful in achieving their potential? What should the way forward be? Share your views and comments on the above CEF analysis, issue brief and web-tool at [email protected] 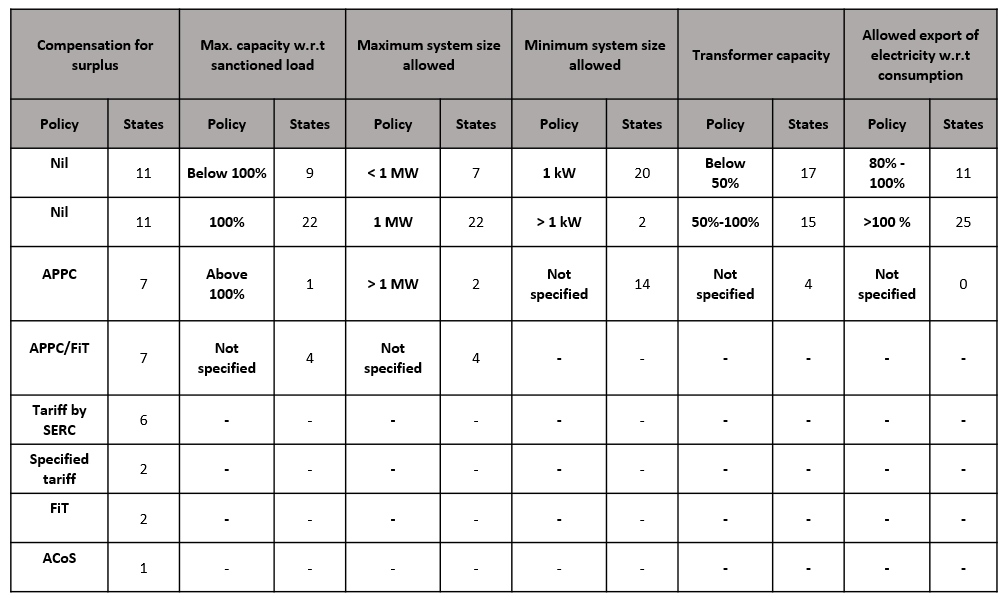 "CEF Analysis” is a product of the CEEW Centre for Energy Finance, which explains real-time market developments based on publicly available data and engagements with market participants. By their very nature, these pieces are not peer-reviewed. CEEW-CEF and CEEW assume no legal responsibility or financial liability for omissions, errors, and inaccuracies in the analysis.

You might also like:
How does the electricity (Rights of Consumers) rules, 2020, impact the rooftop solar market?
What ails discoms? A case study of Andhra Pradesh and Gujarat
Streamlining Open Access – An Alternative to Scaling Renewables in India?
Financing the Energy Transition in a Post Covid-19 India
See recent posts