In July 2018, the Government of India imposed a two-year safeguard duty on solar cells and modules imported from China, Malaysia and Taiwan. In an attempt to spur domestic manufacturing, a 25% duty will be levied for a year, starting from July 2018. The duty rates will decline to 20% for six months starting July 2019, before further being reduced to 15% for another six months. The move has stated two objectives: enhanced energy security through a robust domestic solar manufacturing sector; and increased job creation in the clean energy sector.

At present, India has cell and module manufacturing capacity of 3.1 and 8.8 GW per annum respectively (Table 1). A sizeable proportion of this is located in Special Economic Zones. The Indian manufacturers situated in the SEZ will also be subject to the duty, reducing their competitiveness further. However, while the sales of modules cleared from SEZ to DTA are subject to safeguard duty, the duty is applicable only on the value of imported inputs and not on the value addition done inside the SEZ. Cells manufactured in SEZs and then sold inside the DTA are exempt from safeguard duty (since imported wafers – the raw materials for cell manufacturing – are not subject to safeguard duties). However, standalone module manufacturers located in the domestic tariff area (DTA) will also face increased costs as a result of the safeguard duty as they often import cells for their modules. Only cells manufactured in the DTA (1164 MW) could clearly benefit from the Safeguard Duty.

The relatively underdeveloped state of Indian PV manufacturing can be attributed to the competitive disadvantages of PV manufacturing in India vis-à-vis foreign competitors, particularly Chinese manufacturers. China accounts for close 88% of India’s PV imports and is the dominant force in global PV manufacturing. Upon assessment, the policy support received by Chinese solar PV manufacturers is in stark contrast to the conditions faced by manufacturers in India. Even as the safeguard duty aims to correct for this disparity, it alone will do little for the domestic manufacturing industry. This is better understood in light of the decline in solar deployment targets in China, creating a supply glut in the PV manufacturing market. This has caused the prices of solar cells, wafers, and modules from China falling further. As per estimates from active industry players in India, the prices of imported modules have crashed to as low as USD 0.21/watt. Thus, in the current market, the price of imported modules with the safeguard duty is competitive, or lower, than domestically manufactured modules.

Further, the revision of commissioning timelines for solar projects in India, from 13 – 15 months, to 21 – 24 months allows developers to delay procurement of modules, and pay lower safeguard duties or bypass the duty all together (Figure 1). Thus, even as the competitive edge of the safeguard duty to support domestic manufacturing is limited, it does create significant adverse effects. This is due to uncertainty it has created in the market, marring investor confidence and industry appetite significantly. The safeguard duty will dampen the pace of decline of solar tariffs, and increase the administrative burden of the regulators as they adjudicate pass-through of the cost of the duty as per the Change-in-law clause in the power purchase agreement to the discoms. 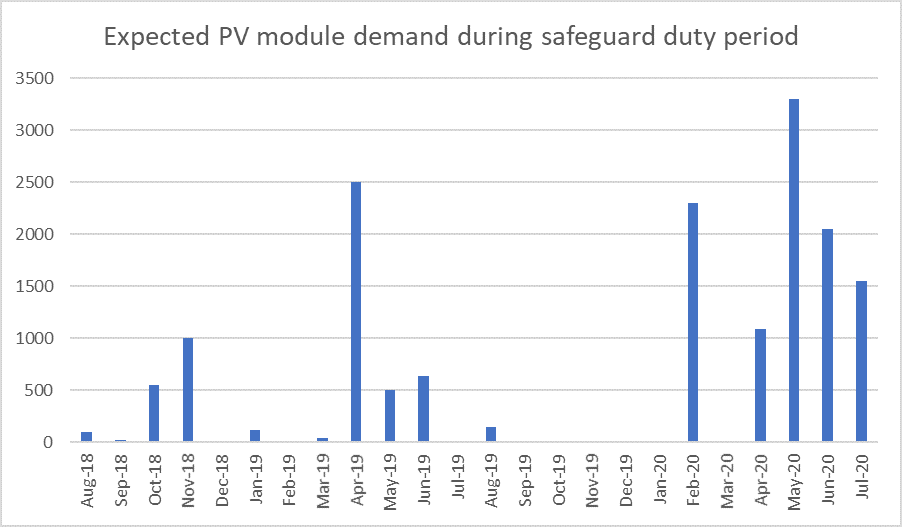 Trade protection measures have historically not been effective means of reviving domestic solar PV manufacturing globally. With benefits spanning fiscal support schemes, access to affordable capital, integrated value chains, and affordable input variable costs, available to the Chinese industry, a declining short-term safeguard duty will not be adequate to balance the scales. Systemic interventions, based on an understanding of global supply chains and PV factory economics, will be necessary to address the competitive disadvantage of the Indian PV manufacturing industry. Measures such as capital subsidy, domestic procurement, investment in R&D of frontier technology, interest rate subvention, and provision of concessional electricity are some steps that could help the resurgence and growth of the domestic PV industry.

The imposition of the safeguard duty has resulted in additional flows into the Indian exchequer. The duty amount collected, INR 1530 crore for the period of August to December 2018, could be used to implement a combination of the proposed market making incentives to strategically advance the domestic solar PV manufacturing market, without creating uncertainty for solar developers, or setting back the tariff advances made by the solar sector.

CEF Analysis” is a product of the CEEW Centre for Energy Finance, explaining real-time market developments based on publicly available data and engagements with market participants. By their very nature, these pieces are not peer-reviewed. CEEW-CEF and CEEW assume no legal responsibility or financial liability for the omissions, errors, and inaccuracies in the analysis.
You might also like:
The benefits and challenges of electric vehicle roaming
Green bonds – not a silver bullet, but needed nonetheless
Bring India’s energy transition closer to communities
CEEW-CEF’s Wish List for Union Budget 2020-21
See recent posts