The sales of electric vehicles (EVs) in the Indian automobile market have grown exponentially in recent years. EVs, across categories (E-2W, E-3W, E-4W, etc.), recorded sales volumes in FY22 that were almost three times that of the previous year. Specifically, for E-4W, there are several different types available in the Indian market: 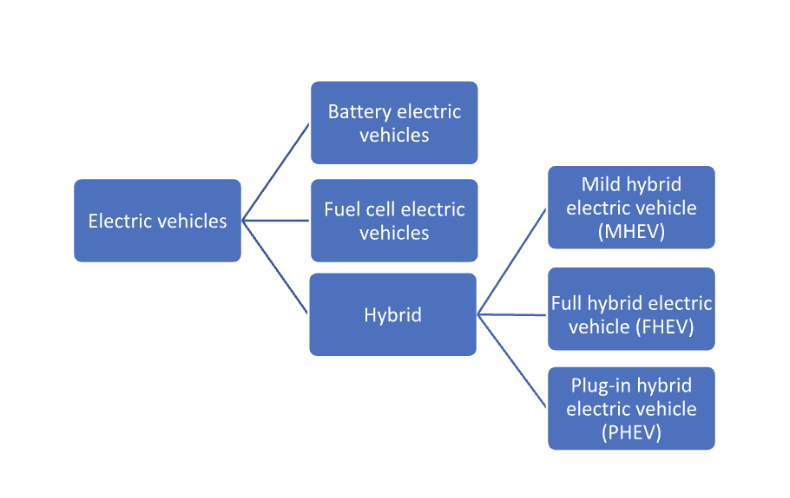 BEVs are those EVs that are powered only by electricity. The main components are electric motors and rechargeable battery packs, which power the entire system. BEVs work on the principle of converting chemical energy from the battery pack to electrical energy, which then powers the electric motor that produces the mechanical thrust to push the car forward. Some BEVs also have a unique mechanism to charge battery packs called regenerative braking. It is based on the principle of converting kinetic energy to electrical energy. BEVs do not produce direct exhaust or tailpipe emissions like internal combustion engine (ICE) vehicles. Since they have motors and battery packs, they are usually heavier than ICE vehicles and produce more torque.

FCEVs operate primarily on electricity, but the power is produced from pure hydrogen gas. As a result, there are no direct exhaust or tailpipe emissions. In this respect, they are very similar to BEVs. However, an additional component that FCEVs have when compared to BEVs is the hydrogen tank, much like petrol and diesel fuel tanks in ICE vehicles.

HEVs are vehicles that are powered by both electricity and conventional fuel. They feature aspects of both electric motors as well as ICEs. HEVs produce tailpipe emissions but lesser than what ICE vehicles produce. They also offer higher fuel economy, more power, and a driving range – all of which are significant advantages over BEVs and ICE vehicles. HEVs often feature regenerative braking for recharging their batteries. There are three different kinds of HEVs available in the market:

Table 1:Types of E-4W with their components, emissions, battery capacity and examples 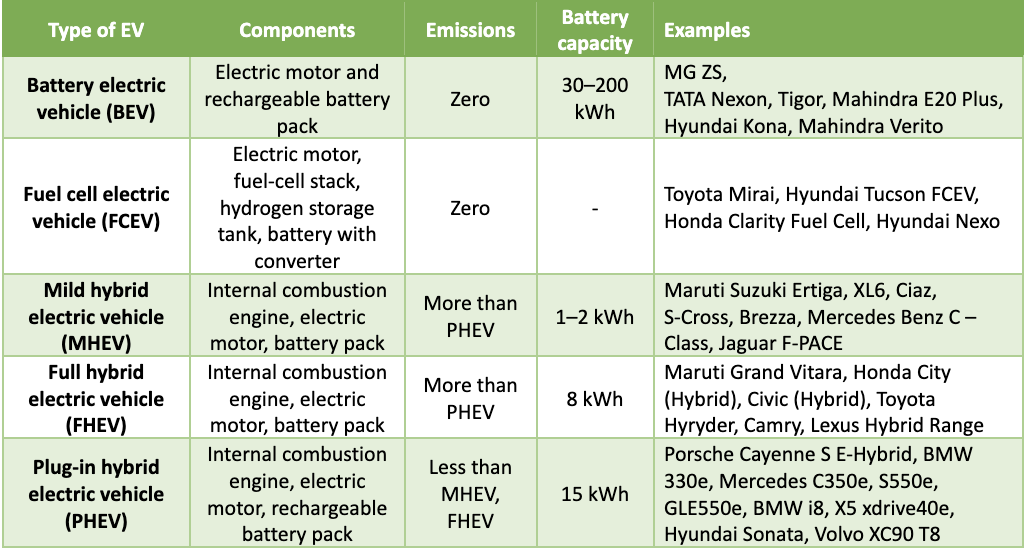 CEF Analysis” is a product of the CEEW Centre for Energy Finance, explaining real-time market developments based on publicly available data and engagements with market participants. By their very nature, these pieces are not peer-reviewed. CEEW-CEF and CEEW assume no legal responsibility or financial liability for the omissions, errors, and inaccuracies in the analysis.
You might also like:
AC vs DC charging
What is the cost of charging electric vehicles?
Financial incentives for electric vehicle buyers in India
Vehicular emissions in India
See recent posts