Electricity banking was introduced by the state of Tamil Nadu in 1986 (Apellate Tribunal for Electricity, 2021). This was done primarily to promote captive and third party open access wind energy generation in the state. Though there is no statutory definition of energy banking, the Appellate Tribunal for Electricity (APTEL) explains it as analogous to a savings account in a financial bank (Apellate Tribunal for Electricity, 2021). A customer deposits money in a bank’s savings account, which a bank lends to other customers at an interest rate. The customer can withdraw the money from the bank at his/her convenience. Similarly, a captive or third party open access wind (or solar) project may generate excess energy during times when the consumer load doesn’t require it. The generator can bank the energy with (or supply it to) the electricity distribution company (discom) instead, which in turn supplies it to its consumers at an applicable tariff. Unlike in a savings account, where the customer gets paid an interest amount, for energy banking, the customer instead has to pay ‘banking charges’ to withdraw the energy from the discom.

The Tamil Nadu’s power utilities and regulators recognised that in order to enable a wind project’s commercial viability, banking is essential. This is because the quantum of wind energy generated varies notably during the day as well as season to season, and does not match the load profile of the consumer. This produces excess or surplus energy which if not consumed instantly, would get lost, thereby leading to a revenue loss for the generator.

Key terms applicable to energy banking are explained below.

Banking charges: Banking charges are levied upon the renewable energy (RE) generator for the energy banked and are paid to the discom and determined by state electricity regulatory commissions. These are typically paid in kind or cash, depending on the state regulations.

Banking period: It is the period in which settlement of energy banked with the discom takes place. It is usually on a monthly or yearly basis. 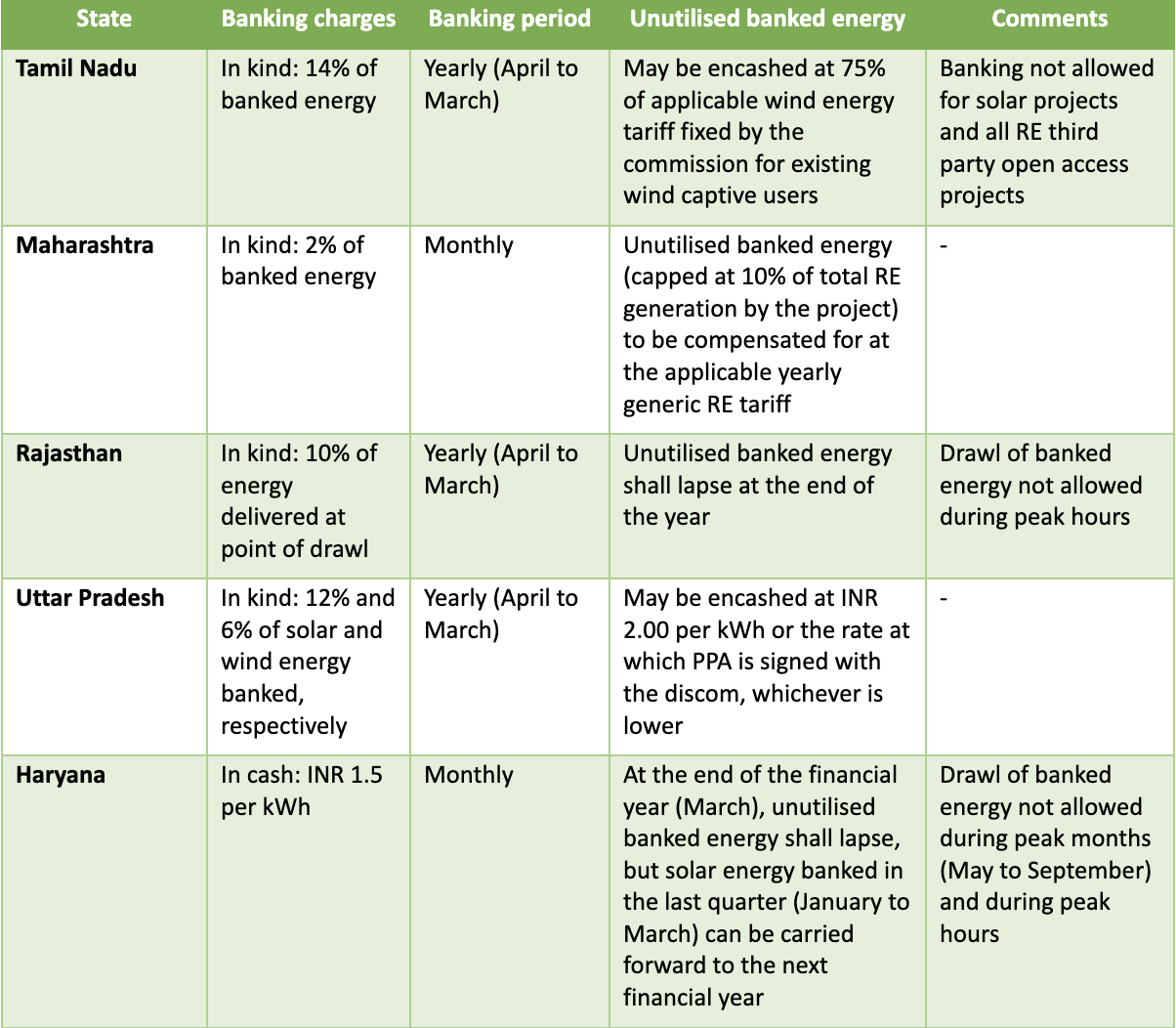 While Tamil Nadu introduced energy banking facilities to promote captive wind energy projects, other RE rich states followed suit and introduced the same for solar and wind captive or third party open access projects. However, in recent years, many of these states have started to withdraw the banking facility or have increased the charges owing to the increasing share of RE in the grid. This includes states such as Karnataka, Gujarat, Andhra Pradesh and Madhya Pradesh. State discoms have attributed the changes to the higher share of intermittent RE as the main reason (Apellate Tribunal for Electricity, 2021).

CEF Analysis” is a product of the CEEW Centre for Energy Finance, explaining real-time market developments based on publicly available data and engagements with market participants. By their very nature, these pieces are not peer-reviewed. CEEW-CEF and CEEW assume no legal responsibility or financial liability for the omissions, errors, and inaccuracies in the analysis.
You might also like:
Green Term–Ahead Market
Wind Repowering
Vehicle emission norms in India
See recent posts